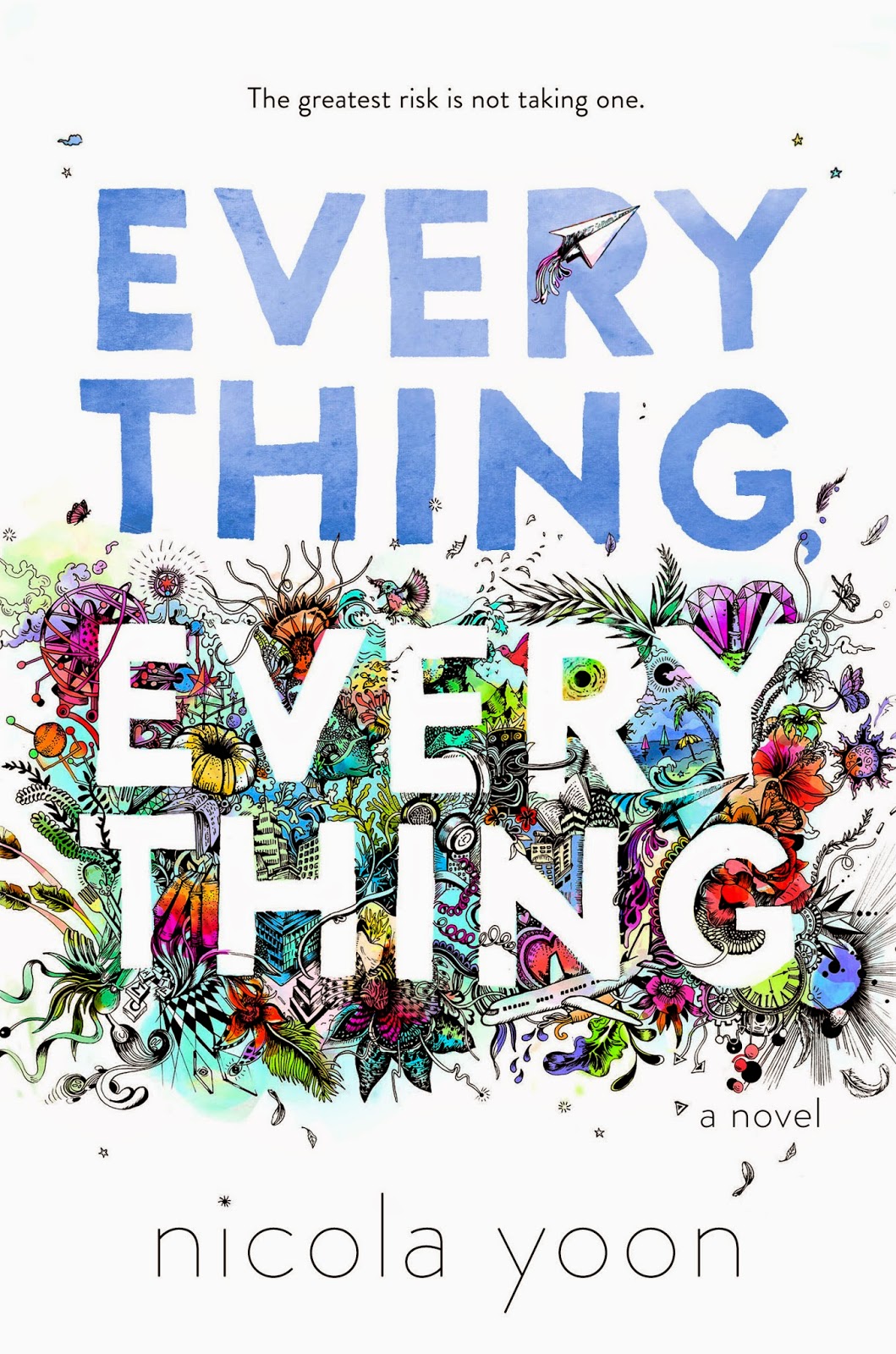 Madeline has never been outside. Never felt the salty, invigorating coolness of the ocean. Never tasted the crispness of the oncoming fall.

Never been to a high school. Never fallen in love.

Never had her heart broken.

But then a boy moves next door. And her life changes forever.

Three and a half stars. *throws confetti but with a sad smile*

An entertaining one sentence summary

There’s this girl and she’s like allergic to the air and grass and well everything, everything but then this dude moves in next door and he only ever wears black and he climbs around on trees and roofs and walls like he’s a monkey and he’s totally flirting with her and she’s like yes please and then they run off to Hawaii to snorkel with humuhumu-whatawhata-something-something fish and that was a bad idea.

Phonetic Scrabble (which is like the coolest idea ever)

LOVING THE BOOKS yo

Being up-and-up on the latest YA hits (that was sarcasm, btw), I really wanted to check out Everything, Everything. I saw a trailer for the upcoming movie randomly pop up on my Facebook page and it looked fairly decent.

Plus, when I saw the cover, I was like YES I WILL LOVE YOU FOREVER.

Note: I think we have learned that Amanda only ever reads/chooses books because of their pretty covers. While this is not always true . . . I do tend to choose books based on the covers.

Entering the book, I was in love. Maddy was absolutely darling: she was sweet and super super smart. She also didn’t cuss, was HOMESCHOOLED and had a great relationship with her mother.

This had the makings of SUCH A GREAT BOOK.

Then comes Olly. Olly cusses quite a bit, which isn’t surprising because his dad is an idiot and cusses even more.

AS I WAS READING THIS BOOK, I was reading another book. It’s Christian nonfiction and one of the parts was about how touching people of the opposite gender is dangerous. Once you start, you can’t stop. I kid you not, I had both of the books open and as I was reading Everything, Everything, Maddy said:

And we see a dangerous progression.

Maddy and Olly are okay with just pantomiming to each other through a window.

They want to meet each other. So Maddy gets her nurse to arrange a meeting. They aren’t allowed to touch each other.

A few weeks later they meet and and Olly grabs Maddy’s hand to help her with a handstand. Oops, accident . . . won’t happen again right? WRONG THIS IS YA FICTION.

And then they run away together and there’s only one bed and . . . yeah. Not good.

This was definitely a God-thing for me to read this book in conjunction with the nonfiction one. It just proved to me that, yes. There is no end to desire. And there isn’t supposed to be within the bounds of marriage! That’s what the world doesn’t understand.

This book was full of beautiful imagery, deep characters, and amazing musings on the universe, but I must part it with a gift of only three and a half stars because of the messages:

A few months ago, I jumped off a cliff into a lake. Maddy’s experience was so much like mine I wanted to share it. Read the book for another even more beautiful passage about the feeling.

He nods. “I’ll go first. I won’t let you drown.” He jumps up and out and does a full somersault before arrowing into the water. A few seconds later he resurfaces and waves up to me. I wave back and then close my eyes to take stock of my situation, because jumping off a cliff seems like a pivotal moment when a little stock-taking should be done. Strangely, though, I felt like I don’t really want to think too much. Like Olly, I just want to jump. I teach out Olly’s face in the water and find him waiting for me. Considering what the future may hold, dumping off this cliff doesn’t seem so scary at all.

Have you read this book? Will you watch the movie?

22-year-old INFP who names inanimate objects, loves to laugh, and is a proud old soul. You can often find her planning out her next crazy project, hugging books, or telling stories about her day that *may* be a little exaggerated. View more posts